I'm going to break with much of the "sturm and drang" convention of the blogosphere and, rather than register my "outrage" at events, suggest a way forward from some of the impasse and negativity - a proposal predicated on political organizing beyond the constraints and constricted expectations of electoral politics that are too-often reduced to the cynicism of "voting against" rather than "voting for."

I believe it is imperative for sensible people to offer some alternatives to the "grass-roots" (such as it is) far-right populism of the Tea Party movement that has managed to gridlock Beltway politics around the most retrograde notions, and for self-styled progressives,  liberals and, yes, concerned "moderates" to begin the difficult work of bringing the country together - beginning at the grass-roots community level - around  constructive agendas and the realization that there is more to civic action and engagement than electoral politics. 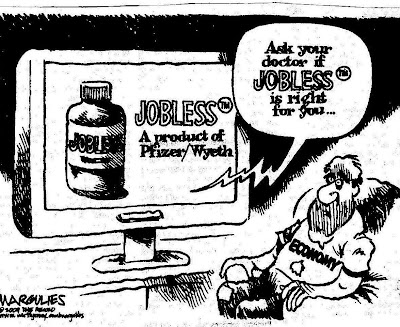 Fourteen million people are unemployed, long-term unemployment remains near record highs, the ratio of job seekers to job openings is 4.3 to 1, and the employment to population ratio has dropped precipitously. Even if the economy grows at a robust average of 3.5% beginning in 2013, labor markets won’t fully recover until 2017. And if average growth is only 3.0% – well within the range of possibility – it will take until 2020. In short, labor markets are in crisis and the longer the crisis persists, the more permanent and growth-inhibiting the damage becomes. 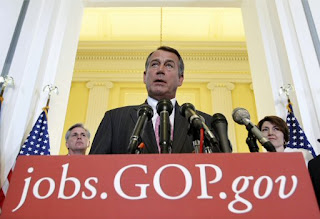 GOP Speaker of the House, John Boehner:  “Since the moment Americans entrusted us with the majority, our focus has been on job creation...

"Helping Americans get back to work is our number one priority..."

Think Progress reports on how this "priority" works in practice:


House Republicans yesterday released their draft budget proposal for labor, health, and human service, which in one fell swoop revives the assault on all their favorite bugaboos, including Planned Parenthood, National Public Radio, the National Labor Relations Board, and President Obama’s health care reform law. The GOP also targeted heat subsidies that prevent low-income families from freezing in the winter, and slashed education funding by $2.4 billion. The bill also eliminates the Administration’s “Race to the Top” education reform program and reduces eligibility for Pell Grants for low-income college students.

Perhaps most surprisingly for a party that claims to be focused on job creation, the GOP budget reduces funding for job training programs that give the unemployed the skills they need to find work in an ailing economy: