The graph that gives the lie to GOP arguments about the economic impact of tax increases vs. tax cuts 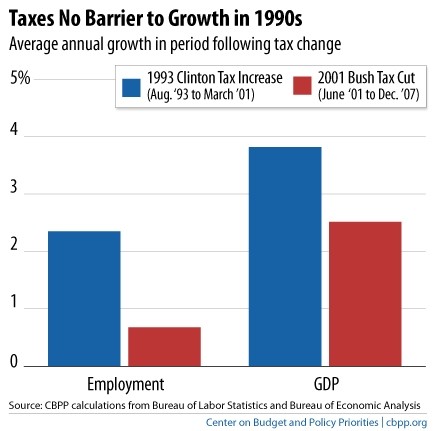 It's no secret that job growth and GDP growth were strong in the years after President Clinton increased taxes to curb deficits and get the government on sounder fiscal footing,  and that George W. Bush presided over a remarkably weak economy after making tax cuts the centerpiece of his economic program.  But that doesn't stop Republicans from spinning fantastical tales of the inevitable and terrible consequences of even modest tax increases to curb long-term deficits.

The truth is that tax cuts are ideology - rather than pragmatic policy - in GOP circles and have the aura of creationism for religious fundamentalists.  I don't really care what religious fundamentalists believe happened millions, or in their view thousands, of years ago - as long as they don't try to sell it as "science" in the schools.  But for contemporary "conservatives" posing as "deficit hawks" to make arguments about tax cuts that are based solely on a belief system, rather than what we know - at least in terms of co-relation - about our economy and fiscal trajectory over the past 20 years is a signal of just how un-serious they are about fiscal sanity and balancing budgets.

An irrational, counter-factual article of faith - rooted in the disastrous "Starve the Beast" anti-government ideology - drives one of our political parties.  And driven by that dogma, they're willing to drive the country off a cliff.

Via Ezra Klein, Wonkbook.
Posted by Bruce Schmiechen at 5/19/2011 No comments: