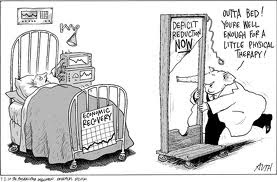 As if it wasn't apparent to anyone other than hard-core ideologues - and politicians who should know better running scared - the evidence increases that deficit mania in a recession is little more than a recipe for making things even worse.

John Cassidy at The New Yorker, offers his perspective on the evidence from Britain that an agenda of austerity - i.e. spending cuts and fixation on short-term deficit reduction - is  utterly wrong-headed in a deep recession:


With all the talk of a possible double-dip recession in the U.S. economy—here’s my own little contribution—it’s surprising (and somewhat scandalous) that more attention isn’t being paid to what is happening in Britain, where a second economic downturn began last fall and shows few signs of relenting.

About a year ago, with the British economy seemingly recovering fairly well from the financial crisis of 2008, David Cameron’s Conservative-Liberal coalition embarked on a vigorous policy of deficit reduction, raising taxes and cutting government spending in an effort to balance the budget by 2015. How this experiment in pre-Keynesian economic policy turns out obviously has important implications for the fiscal debate on this side of the Atlantic. 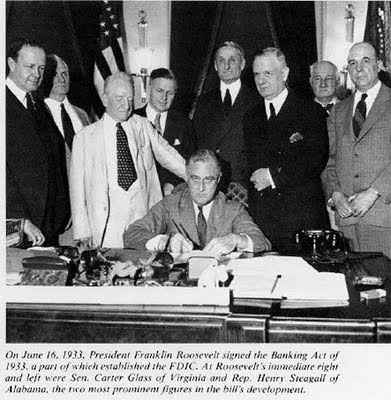 Joe Nocera, writing in today's New York Times, has a fascinating piece on the history - and the effectiveness - of the Glass-Steagall act regulating banking. Glass-Steagall, which established the Federal Deposit Insurance Corporation and separated retail banks from the financial speculation of Wall Street investment banks, was passed in 1933 - June 16 to be exact.

Glass-Steagall's wall of separation between financial speculation and banks holding customer deposits was repealed by the Gramm-Leach-Bliley Act of 1999.  Critics including Elizabeth Warren, Nouriel Roubini and Paul Volcker have suggested that the repeal contributed significantly to the financial crisis of 2008 and want to see such regulations re-implemented.

Posted by Bruce Schmiechen at 6/18/2011 No comments: Links to this post