From American Prospect and Demos:

1. The government has collected less in taxes as a proportion of the economy in the past three years than it has in any three-year period since World War II, and tax rates are at historic lows.

2. One out of three multi-millionaires pays a lower percentage of their income in taxes than the vast majority of people making $60,000 a year.

3. Chairman Paul Ryan’s budget proposal, which has been praised by Governor Romney, would deliver benefits to people with incomes over $1 million that are 10 times greater than the benefits to those earning $40,000 or less. 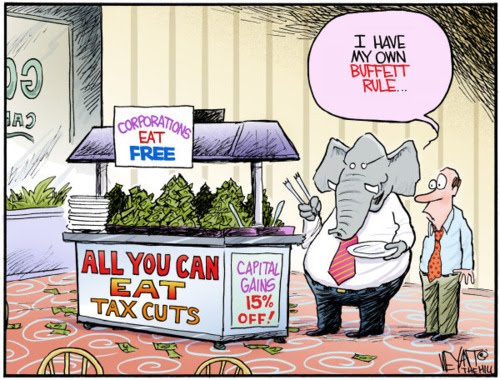 "Big news week" for FOX, GOP hacks and a desperate Romney campaign boils down to a Hypocrites' Kerfuffle. Up w/ Chris Hayes has it:

Just a few months ago I was feeling some hope about Europe. You may recall that late last fall Europe appeared to be on the verge of financial meltdown; but the European Central Bank, Europe’s counterpart to the Fed, came to the Continent’s rescue. It offered Europe’s banks open-ended credit lines as long as they put up the bonds of European governments as collateral; this directly supported the banks and indirectly supported the governments, and put an end to the panic.

The question then was whether this brave and effective action would be the start of a broader rethink, whether European leaders would use the breathing space the bank had created to reconsider the policies that brought matters to a head in the first place.

But they didn’t. Instead, they doubled down on their failed policies and ideas. And it’s getting harder and harder to believe that anything will get them to change course.