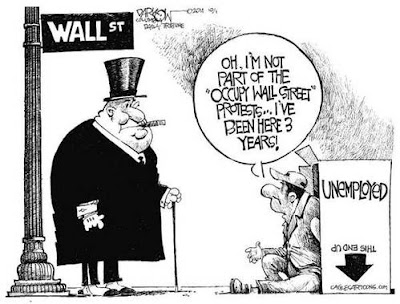 This commentary on the Wall Street protests from Gene Marcial is interesting primarily because it appeared on the Forbes magazine website. Forbes characterizes itself as "Information for the World's Business Leaders." Marcial wrote the "Inside Wall Street" column at Business Week for 28 years:


Surely, it’s time for the nation’s leaders to meet with the Occupy Wall Street protesters and publicly address their grievances. The country’s decision makers, most notably those in Congress, can’t simply watch idly by and wish them away, as they appear to be doing...

One of the major problems that most Americans feel is their utter sense of frustration and helplessness in the face of the mounting oppressive problems that the gasping economy and rudderless leadership in Congress have engendered. So this expanding public outcry shouldn’t be  surprising at all.

Email ThisBlogThis!Share to TwitterShare to FacebookShare to Pinterest
Labels: Annals of Class Warfare

9-9-9: "Raising Cain" or just raising taxes on those who can least afford it?

Worse, he has called African-Americans "brainwashed" because they've trended overwhelmingly toward the Democratic Party - their "plantation masters" according to Cain - since the 1960s when the GOP first ran a presidential candidate who opposed the Civil Rights Act and Republicans began eagerly embracing Dixiecrats who couldn't accept change.  In recycling that racial attack and posing as the "responsible" black man, Cain is giving cover to bigots like Rush Limbaugh who routinely smear black Democrats in the same vein.

And, while pandering to the GOP's racial polarization, Cain has the temerity to describe himself as a "real black man" - as opposed to President Obama.  That one is worthy of contempt, but no further comment.

In all of the brouhaha about Cain's rhetoric as he's rising in the GOP polls, appealing directly to the Tea Party base that is steeped in white resentment and hatred of President Obama, Cain's 9-9-9 tax plan tends to get overlooked. It's a 9% tax on income, a 9% tax on business profits and a 9% national sales tax.  Cain would entirely eliminate capital gains taxes - making even worse one of the most unfair income tax loopholes on the books.

On it's face, Cain's 9-9-9 scheme is obviously a tax break for the rich. Worse, it's a tax increase for the folks with the lowest incomes.  And as formulated it's even a bad deal for many businesses and for job creation.