The Heritage Foundation in Washington, D.C., has always had a special place in my heart. In the late 1980s, during the presidency of George Herbert Walker Bush, the right-wing think tank provided me with my first job as a young conservative intellectual. My first assignment was to write a policy brief about presidential war powers. I was removed from the project after I wrote a draft that began with the observation that the U.S. Constitution divides war powers between Congress and the president, and gives the most important war powers — the power to declare war and to fund it — to Congress. The higher-ups at Heritage reassigned the paper to a Wall Street Journal staffer, who provided them with what they wanted: a brief arguing that the president has absolute, uncontrollable power in foreign affairs.

One of my next assignments was to write a policy paper justifying a forthcoming bill from the late Sen. Jesse Helms, a belligerent reactionary from North Carolina. When I met with the senator’s staff, I was told to wait because Helms wasn’t sure what he was going to put in the bill. After I failed to turn in the policy brief on time, I received an official reprimand from my supervisor, which I treasured until I lost it during a move. The reprimand said, in effect, that at Heritage we write policy papers first and add the facts later.

Things went downhill. I soon left Heritage and, a few years later, the conservative movement altogether. When several colleagues and I founded the New America Foundation in the late 1990s, I held up Heritage as a model of what a genuine think tank ought not to be. 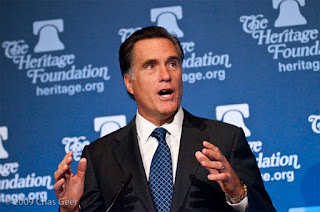 I am amused to report that my former colleagues at the Heritage Foundation have lost none of their willingness to sacrifice truth to propaganda. The Heritage Foundation has published an “Index of Dependence on Government” by William W. Beach and Patrick Tyrrell that seeks to bolster Mitt Romney’s theme that at least 47 percent of Americans are parasitic, government-dependent “takers” rather than “makers” (hat tip to Thomas B. Edsall):