More on LIBOR - an entertaining (believe it or not)
LIBOR scandal segment on UP w/ Chris Hayes:

Visit msnbc.com for breaking news, world news, and news about the economy
Posted by Bruce Schmiechen at 7/07/2012 No comments: Links to this post

Email ThisBlogThis!Share to TwitterShare to FacebookShare to Pinterest
Labels: The Banksters


Here in the early stages of the Libor scandal — and, yes, this thing is far from over — there are two big surprises.

The first is that the bankers, traders, executives and others involved would so openly and, in some cases, gleefully collude to manipulate this key interest rate for their own benefit. With all the seedy bank behavior that has been exposed since the financial crisis, it’s stunning that there’s still dirty laundry left to be aired. We’ve had predatory subprime lending, fraudulent ratings, excessive risk-taking and even clients being taken advantage of in order to unload toxic mortgages. 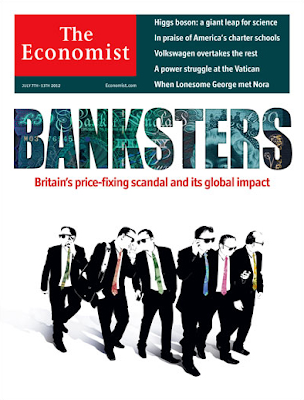 Yet even with these precedents, the Libor scandal still manages to shock. Libor — that’s the London interbank offered rate — represents a series of interest rates at which banks make unsecured loans to each other. More important, it is a benchmark that many financial instruments are pegged to. The Commodity Futures Trading Commission, which doggedly pursued the wrongdoing and brought the scandal to light, estimates that some $350 trillion worth of derivatives and $10 trillion worth of loans are based on Libor.

With so much depending on this one critical interest rate, there shouldn’t ever be a question about its reliability. Yet beginning in 2005, according to the C.F.T.C. and the Justice Department, derivative traders at Barclays, the too-big-to-fail British bank, with the active involvement of traders at other yet-unnamed banks, persuaded their fellow bank employees to submit Libor numbers that were shaded in ways that would help ensure their trades were profitable. Even Robert Diamond Jr., the former Barclays chief executive who lost his job over the scandal, said that reading the traders’ e-mails made him “physically ill.”