Why I'm supporting the conservative in 2012

E.J. Dionne explains that, in the current political climate, our moderately liberal President Obama is also the only authentically conservative candidate - bent on strengthening our existing modest social compact and preserving the post-New Deal balance of public interest vs. concentrated economic power (and although Dionne doesn't note it, guaranteeing civil rights for all Americans) against the radical reactionary designs of the GOP to dismantle the system, slash government and spread poisonous paranoia:


At a moment when the nation wonders whether politicians can agree on anything, here is something that unites the Republican presidential candidates — and all of them with President Obama: Everyone agrees that the 2012 election will be a turning point involving one of the most momentous choices in U.S. history. 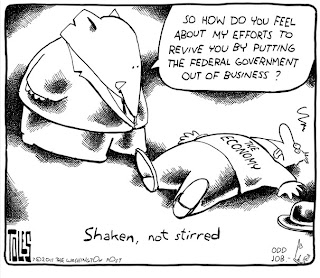 True, candidates (and columnists) regularly cast an impending election as the most important ever. Campaigning last week in Pella, Iowa, Republican Rick Santorum acknowledged as much. But he insisted that this time, the choice really was that fundamental. “The debate,” he said, “is about who we are.”

Speaking not far away, in Mount Pleasant, Newt Gingrich went even further, and was more specific. “This is the most important election since 1860,” he said, “because there’s such a dramatic difference between the best food-stamp president in history and the best paycheck candidate.” Thus did Gingrich combine historic sweep with a cheap and inaccurate attack. Nonetheless, it says a great deal that Gingrich chose to reach all the way back to the election that helped spark the Civil War.

Mitt Romney was on the same page in a speech in Bedford, N.H. “This is an election not to replace a president but to save a vision of America,” he declared. “It’s a choice between two destinies.” Sounding just like Santorum, he urged voters to ask: “Who are we as Americans, and what kind of America do we want for our children?”

Obama could not agree more. “This is not just another political debate,” the president said in his theme-setting speech in Osawatomie, Kan., earlier this month. “This is a make-or-break moment for the middle class, and for all those who are fighting to get into the middle class.”

On this one, Santorum, Gingrich, Romney and Obama all have it right. For the first time since Barry Goldwater made the effort in 1964, the Republican Party is taking a run at overturning the consensus that has governed U.S. political life since the Progressive era.

Paul Krugman on "Springtime for Toxics":


Here’s what I wanted for Christmas: something that would make us both healthier and richer. And since I was just making a wish, why not ask that Americans get smarter, too? 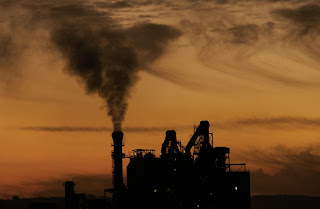 Surprise: I got my wish, in the form of new Environmental Protection Agency standards on mercury and air toxics for power plants. These rules are long overdue: we were supposed to start regulating mercury more than 20 years ago. But the rules are finally here, and will deliver huge benefits at only modest cost.

So, naturally, Republicans are furious. But before I get to the politics, let’s talk about what a good thing the E.P.A. just did.

As far as I can tell, even opponents of environmental regulation admit that mercury is nasty stuff. It’s a potent neurotoxicant…