All you need to know about Paul Ryan 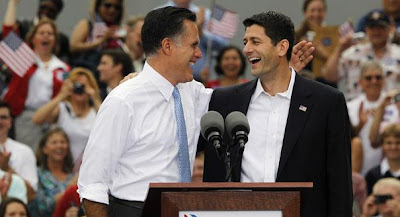 Aside from his fealty to the sociopathic cult novelist Ayn Rand (she of the "Christian morality is evil" Objectivist  philosophy that was embedded in a series of melodramatic  novels), the following is IMHO the single most salient fact attached to Paul Ryan:


(B)ecause commercial insurers cost more to run than government plans, the Wisconsin Republican's proposal to privatize Medicare starting in 2022 would actually spark a dramatic increase in how much the nation spends on healthcare for the elderly, according to an independent analysis by the nonpartisan Congressional Budget Office.

There is not an ounce of "fiscal conservative" in this scheme - it's privatization for the sake of ideology - Ayn Rand's "moral foundation" for unbridled capitalism of the sort that makes sociopaths and parasites like Dick Cheney and Mitt Romney multi-millionaires many times over.
Posted by Bruce Schmiechen at 8/11/2012 No comments:

Willard decides that Bain Capital isn't a large or repugnant enough enough stone to be tied to his neck - his "game changeer" Veep pick brings on Dick Cheney, Ayn Rand and killing Medicare


For progressives, the choice of Ryan makes the task of exposing Mitt Romney’s agenda for the future of the country—already mortgaged to the conservative movement as the price of his nomination—vastly easier.

The choice of a running-mate is often described as the “first presidential decision” of any party nominee. By picking Ryan, Romney has finally forfeited any opportunity to pose as a technocratic crypto-moderate who is a safe alternative for voters disappointed by life under the Obama administration.

All along, Obama’s reelection has depended largely on his ability to make November 6 a clear and dramatic choice between two future courses for the country rather than a referendum on the status quo. The Romney-Ryan ticket makes a “choice election” unavoidable.

In his relentless, desperate pandering to the Tea Party base of the GOP he presumes to lead, Willard doubles-down and offers us "Ryan's Choice" - a dystopian Ayn Rand "moral foundation" for the deregulated capitalism that makes Dick Cheney a very happy man, while seniors see the future of Medicare turned into discount coupons  to help them try to buy the world's most expensive health care from private insurance companies.