"9 Things The Rich Don't Want You To Know About Taxes" 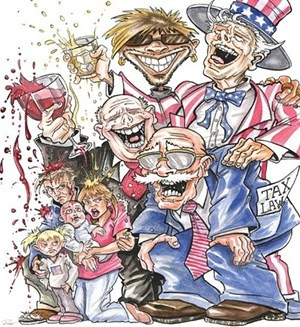 Illustration by Justin Rose (Metro Times)
For three decades we have conducted a massive economic experiment, testing a theory known as supply-side economics. The theory goes like this: Lower tax rates will encourage more investment, which in turn will mean more jobs and greater prosperity -- so much so that tax revenues will go up, despite lower rates. The late Milton Friedman, the libertarian economist who wanted to shut down public parks because he considered them socialism, promoted this strategy. Ronald Reagan embraced Friedman's ideas and made them into policy when he was elected president in 1980.

For the past decade, we have doubled down on this theory of supply-side economics with the tax cuts sponsored by President George W Bush in 2001 and 2003, which President Obama has agreed to continue for two years. You would think that whether this grand experiment worked would be settled after three decades. You would think the practitioners of the dismal science of economics would look at their demand curves and the data on incomes and taxes and pronounce a verdict, the way Galileo and Copernicus did when they showed that geocentrism was a fantasy because Earth revolves around the sun (known as heliocentrism). But economics is not like that. It is not like physics with its laws and arithmetic with its absolute values.

Tax policy is something the Framers left to politics. And in politics, the facts often matter less then who has the biggest bullhorn.

The Mad Men who once ran campaigns featuring doctors extolling the health benefits of smoking are now busy marketing the dogma that tax cuts mean broad prosperity, no matter what the facts show.

As millions of Americans prepare to file their annual taxes, they do so in an environment of media-perpetuated tax myths. Here are a few points about taxes and the economy that you may not know...  (All figures are inflation adjusted.)
Read more »
Posted by Bruce Schmiechen at 12/30/2013 No comments: Links to this post


More than a million unemployed Americans are about to get the cruelest of Christmas “gifts.” They’re about to have their unemployment benefits cut off. You see, Republicans in Congress insist that if you haven’t found a job after months of searching, it must be because you aren’t trying hard enough. So you need an extra incentive in the form of sheer desperation. 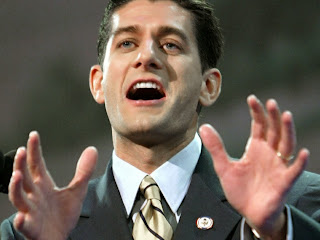 Paul Ryan has set everyone’s socks ablaze with a new comment suggesting he wants to shake down the country again over the debt limit. This inevitably inspired a lot of amateur psychoanalysis attempting to figure out whether he was serious or just pandering to the base. Whether that is true is an important thing to figure out, but the deeper subtext here is that the Republican Party continues to organize itself around the kind of austerity agenda that, should they obtain enough power to implement it, would cause another recession immediately, possibly a very bad one.

Retrospective on dishonesty and hysterics around the rapidly declining deficit

One of the last handful of honest conservatives, Bruce Bartlett @ NYTs, looks back at the Bush-induced "Obama" deficits:


On Dec. 20, the Brookings Institution economist Justin Wolfers sent out this provocative post on Twitter: “The decline in the budget deficit since 2009 is the largest four-year improvement since the demobilization from WWII.”

I was aware that the deficit was declining sharply, both in nominal terms and as a share of the gross domestic product, but hadn’t thought much about the magnitude. Mr. Wolfers, whose partner Betsey Stevenson is a member of President Obama’s Council of Economic Advisers, is correct, as the data show. Fiscal year 2014 began on Oct. 1.

There is indeed no comparable period in which the deficit fell as much since the aftermath of World War II for the simple reason that the deficit never grew large enough to drop so much. The largest deficit recorded in the postwar era before 2009 was in 1983, when it reached 6 percent of G.D.P.

This got me thinking about President Obama’s budgetary record when viewed from 2009. I turned first to the last C.B.O. projection of the George W. Bush administration, which was made on Jan. 7, 2009, and thus includes no Obama policies. The decline in the deficit after 2010 is largely attributable to the assumed expiration of the Bush tax cuts, because the C.B.O. must assume current law and they were set to expire at the end of 2010.

Congressional Budget Office
What’s important to see is that the federal government was going to run the largest deficit since World War II in fiscal year 2009, which began on Oct. 1, 2008, regardless of who became president on Jan. 20, 2009. It was baked in the cake by policies put in place by the Bush administration and the natural rise in spending and fall in revenues resulting from a sharp drop in economic growth and rise in unemployment, which economists call “automatic stabilizers.”

This point was always known by anyone who bothered to look carefully at the data, regardless of how many hand-wringers on both sides of the aisle acted as if the deficit was solely a result of President Obama’s policies. Both because of myopia and because everyone tends to invest the president with far more power than he actually has, there is a tendency to assume that whatever happens on his watch is attributable solely to him.

"Losing it over Obamacare"

I know, I know.  That every GOP hack who wants to stay on Fox News and so on must relentlessly spout idiotic drivel about the old Heritage Foundation plan cooked up by Stuart Butler back in 1989 and supported by many Republicans, even being adopted successfully in MA by one Mitt Romney as governor, although all shifting into massive opposition when Obama came out for it in an effort to gain GOP support (hah!).  So, I should not waste my or anybody else's time pointing out the specific lies and stupidities emitted by any such "pundit."

However, I cannot resist in the case of Charles Krauthammer in the Washington 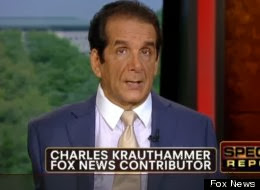 Post of Dec. 20, 2013...he really shows the pathetic state of those trying to block the implementation of Obamacare (OK OK, "ACA").  It may be that I am using him to complain about a syndrome so entrenched that we do not even pay it any more mind. But the basis of its ongoing constant diatribes on this matter are becoming increasingly inane and absurd.  So, I shall pick this particular column apart.

The Minimum Wage Brouhaha According to Comedy Central