The Long Con: Mail-Order Conservatism - "Mitt Romney is a liar..."

Mitt Romney is a liar. Of course, in some sense, all politicians, even all human beings, are liars. Romney’s lying went so over-the-top extravagant by this summer, though, that the New York Times editorial board did something probably unprecedented in their polite gray precincts: they used the L-word itself. “Mr. Romney’s entire campaign rests on a foundation of short, utterly false sound bites,” they editorialized. He repeats them “so often that millions of Americans believe them to be the truth.” “It is hard to challenge these lies with a well-reasoned-but- overlong speech,” they concluded; and how. Romney’s lying, in fact, was so richly variegated that it can serve as a sort of grammar of mendacity. 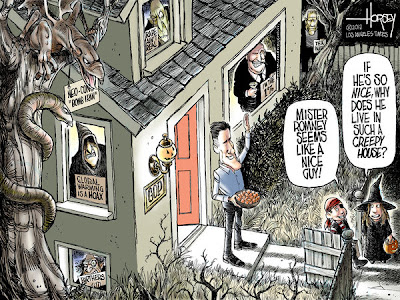 Some Romney lies posit absences where there are obviously presences: his claim, for instance, that “President Obama doesn’t have a plan” to create jobs. Other Romney fabrications assert presences where there are absences. A clever bit of video editing can make it seem like Romney was enthusiastically received before the NAACP, when, in fact, he had been booed. There are lies, damned lies, statistics—like his assertion that his tax cut proposal won’t have any effect on the federal budget, which the Tax Policy Center called “not mathematically possible.” That frank dismissal vaulted the candidate into another category of lie, an attempt to bend time itself: Romney responded by calling that group “biased”; last year, he called them “objective.”

There are outsourced lies, like this one from deep in my files: in 2007, Ann Romney told the right-wing site Newsmax.com that her husband had “always personally been prolife,” though Mitt had said in his 1994 Senate race, “I believe that abortion should be safe and legal in this country.” And then Ann admitted a few sentence later, “They say he flip-flopped on abortion. Well, you know what? He did change his mind.”

And then there’s the most delicious kind of lie of them all, the kind that hoists the teller on his own petard as soon as a faintly curious auditor consults the record for occasions on which he’s said the opposite. Here the dossier of Mittdacity overfloweth. In 2012, for example, he said he took no more federal money for the Salt Lake City Olympic Games than previous games had taken; a decade earlier, however, he called the $410 million in federal money he bagged “a huge increase over anything ever done before.”