Bogus Tweet from a Big Hypocrite: "HALF of America pays NO taxes. Zero"


Yesterday famed "Christian" pastor Rick Warren, wealthy author and megachurch leader (considered one of the most influential evangelicals in the US), tweeted the following:


HALF of America pays NO taxes. Zero. So they're happy for tax rates to be raised on the other half that DOES pay any taxes.

After a firestorm ignited decrying this egregious mix of selfishness and ignorance, Mr. Warren deleted his tweet. But the screenshot is preserved for Internet eternity.

"Titanic" offers Jon Stewart's recent "tax day" response to this bit of demagogic, right-wing nonsense that is a staple of the FOXoids (a false assertion that's doubly shocking dressed up in the cloak of "Christianity," which is rooted in the belief that privileges of the wealthy  are, if anything, an impediment to their salvation and that "the least among you" are favored in the eyes of God):

America and the Beltway - Parallel Universes 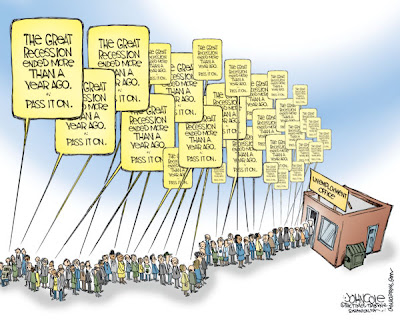 The President spoke Thursday night of the deep skepticism and disaffection many Americans feel for Washington when confronted with craziness like the debt ceiling brinksmanship.

But a big part of this problem is that too much of the rhetoric we hear, even from the White House and leading Democrats, puts cutting deficits before creating jobs and feeds the frustration and disbelief that our political system can help solve the worst of our problems.

If the main problem is posed as cutting government spending, the GOP's social nihilism has already won the day and prospect of promoting effective public policy has been severely diminished.

When Larry Summers and Paul Krugman agree that most of the Beltway politicians are barking up the wrong economic tree, one has what anyone to the left of David Brooks might well consider a compelling consensus.

Robert Reich has more good commentary on the divide between Washington's political games and the realities most of us face:


We now live in parallel universes.

Felix Salmon thinks it was: 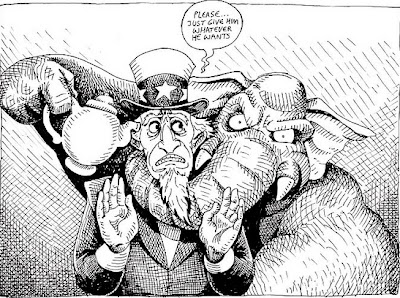 For 37 years, the debt ceiling has provided an easy way for the party which isn’t in the White House to posture politically against the party which is in the White House. Even Barack Obama voted against raising it, once. Every one of the dozens of times the debt ceiling was reached, there was a small but non-zero probability that something disastrous would happen. And each time, disaster was, predictably, averted. It’s a classic sign of how tail risks are treacherous and breed invidious complacency…

And now we’re paying the price. It’s increasingly looking like the best-case scenario is that America simply loses its triple-A credit rating — something which in and of itself will be pointless, dangerous, unnecessarily expensive and potentially catastrophic. The worst-case scenario, of course, is an outright default.

Bohener's Plan: "The Greatest Increase in Poverty and Hardship Produced by Any Law in Modern U.S. History" 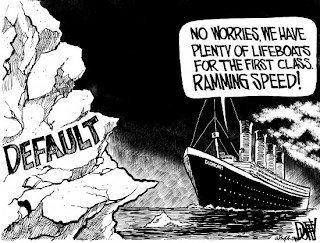 CBPP Analysis of John Boehner’s Plan: The Center on Budget and Policy Priorities concludes that if enacted, John Boehner’s debt ceiling plan “could well produce the greatest increase in poverty and hardship produced by any law in modern U.S. history.”

That sounds to me like something that would create strong incentives to not be poor and, indeed, to fully incentive richness. Consequently, we’ll have massive economic growth. Right?

Think of all the old people who will be willing to do odd jobs, whatever, in order to pay for health care. No more free-riding from grandma and grandpa to slow the economy down.