California Comeback - Lessons for the Country?


Modern movement conservatism, which transformed the G.O.P. from the moderate party of Dwight Eisenhower into the radical right-wing organization we see today, was largely born in California. The Golden State, even more than the South, created today’s religious conservatism; it elected Ronald Reagan governor; it’s where the tax revolt of the 1970s began. But that was then. In the decades since, the state has grown ever more liberal, thanks in large part to an ever-growing nonwhite share of the electorate.


As a result, the reign of the Governator aside, California has been solidly Democratic 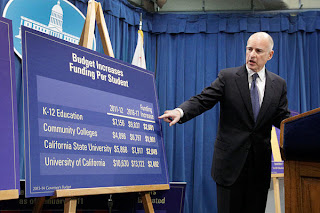 since the late 1990s. And ever since the the political balance shifted, conservatives have declared the state doomed. Their specifics keep changing, but the moral is always the same: liberal do-gooders are bringing California to its knees.

A dozen years ago, the state was supposedly doomed by all its environmentalists. You see, the eco-freaks were blocking power plants, and the result was crippling blackouts and soaring power prices. “The country’s showcase state,” gloated The Wall Street Journal, “has come to look like a hapless banana republic.”

But a funny thing happened on the road to collapse: it turned out that the main culprit in the electricity crisis was deregulation, which opened the door for ruthless market manipulation. When the market manipulation went away, so did the blackouts.

Undeterred, a few years later conservatives found another line of attack. This time they said that liberal big spending and overpaid public employees were bringing on collapse.