"David Brooks sure reads a lot of books" 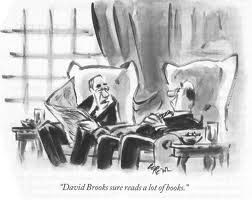 David Brooks wrote another of those "David Brooks columns" on Friday. Citing a recent book on the financial crisis, he targets Fannie Mae as "a cancer that helped spread risky behavior and low standards across the housing industry."  Brooks notes portentiously, "We all know what happened next."

Yes, Fannie Mae and Freddie Mac are examples of government agencies that acted irresponsibly and were co-opted by the financial industry. And, yes, "we all know" there was a financial crisis in 2008 triggered by the mortgage meltdown.

But the notion - or even implication - that Fannie Mae was the "cancer" underlying the industry's "risky behavior and low standards" is a right-wing talking point that is so misleading and misdirected that it constitutes a Big Lie. It's provenance - desperation on the part of the right to blame government rather than markets for the greatest market failure in recent memory - is no mystery.  "Conservatives" need to  implicate government rather than under-regulation and and the voracious market velocity of the industry itself.

Dean Baker at Center for Economic and Policy Research responded definitively to Brooks: