(T)here is, as some of us have tried to point out, a huge magic asterisk in the revenue projections: Ryan calls for $3 trillion in tax cuts, but insists that his plan will be revenue-neutral, because they will do something unspecified to broaden the tax base. Ryan and his colleagues have stonewalled all inquiries about what that something might be.

The best guess has to be that there is no there there — that if they ever get to the point of making this an actual plan, they’ll invoke the wonderful “dynamic” effects of lower taxes on rich people to fill that $3 trillion gap...

Once again, let us wonder at the way this plan has been treated by the commentariat. A guy says, “I care deeply about the deficit!” And then he releases a plan that depends on finding $3 trillion over the next decade from some unspecified source — oh, and he comes from a party that has a 30-year track record of promising to reduce the budget deficit but actually increasing it.

And everyone takes him seriously!

The WSJ's number of the week: "5.5 million: Americans unemployed and not receiving benefits": 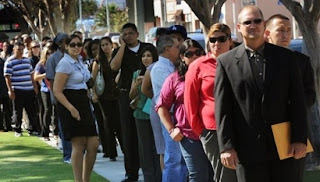 Number of the Week: Millions Set to Lose Unemployment Benefits, by Mark Whitehouse, WSJ: ...The country’s unemployment rolls are shrinking... As of mid-March, about 8.5 million people were receiving some kind of unemployment payments, down from 11.5 million a year earlier...

To some extent, the shrinkage reflects a desirable reality: Some people are leaving the unemployment rolls because they’re finding jobs. The number of employed in March was up nearly 1 million from a year earlier...

Many Americans, though, are simply running out of time. As of March, about 14 million people were unemployed... At the time..., about 8.5 million were receiving some kind of unemployment payments... That leaves about 5.5 million people unemployed without benefits, up 1.4 million from a year earlier. ...