Where the Tea Party has taken us... 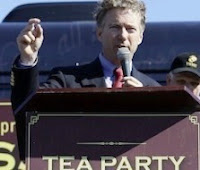 It's not likely we'll ever again have the opportunity to use a news item from the Oil And Gas Financial Journal, but here's their piece on Kentucky's Tea Party Senator, Rand Paul, and his fight to end government regulation of business:

Republican Senator Rand Paul of Kentucky is single-handedly blocking federal legislation on pipeline safety that the pipeline industry overwhelmingly supports. Paul says he opposes the regulation on “philosophical grounds.” He was elected to the Senate in 2010 with Tea Party support, and Paul and that group are committed to reducing government regulations and “downsizing” the federal government.

Paul is the lone member of the US Senate who opposes a bill that would strengthen safety rules for oil and gas pipelines, a measure that some of the largest trade associations in the pipeline industry, including the Interstate Natural Gas Association of America (INGAA), the American Gas Association (AGA), and the Association of Oil Pipelines, support.