The crisis is jobs, not deficits 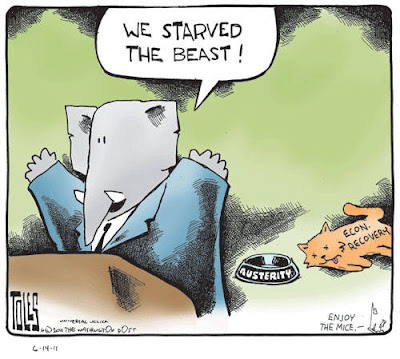 Yes, we have a serious need to reduce spending over the long-term - with rising health care costs in both private and public markets the key area that appears out-of-control.

But at this point in a weak, essentially "jobless" recovery, the focus on deficit reduction is a fool's errand.  This entire deficit debate has been generated, cynically, by a GOP that has put their fetish for fiscally profligate tax cuts over balancing budgets.

Underlying the GOP's apparent cognitive dissonance on fiscal matters is a long-term strategy to use a deficit crisis to destroy essential government social programs.  In the nearer term, their aim is to weaken the President even if it means economic ruin.

Clinton administration economic advisor Laura Tyson brings some sensible thought about serious priorities into the heated atmosphere of deficit hysterics and debt-ceiling roulette - smokescreens obscuring our very real problems that, frankly, too many Democrats have bought into:


Long term, the United States faces a fiscal challenge that must be tackled –- but it is not an immediate fiscal emergency. In the labor market, though, there is an immediate crisis, the worst since the Great Depression...

The Jobless and Wageless "Recovery"

Steven Greenhouse at NYT's Economix has disturbing - but not really surprising - news on the unequal benefits at the center of a historically weak economic recovery.

Regular folks aren't making signficant gains, while the corporate and economic elites are doing just fine and taking the lion's share of increases in national income. The arc of inequality that's predominated over the last thirty years continues, in extremis:


Economists at Northeastern University have found that the current economic recovery in the United States has been unusually skewed in favor of corporate profits and against increased wages for workers.

In their newly released study, the Northeastern economists found that since the recovery began in June 2009 following a deep 18-month recession, “corporate profits captured 88 percent of the growth in real national income while aggregate wages and salaries accounted for only slightly more than 1 percent” of that growth.