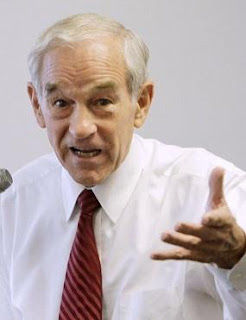 Mr. Paul identifies himself as a believer in “Austrian” economics — a doctrine that it goes without saying rejects John Maynard Keynes but is almost equally vehement in rejecting the ideas of Milton Friedman. For Austrians see “fiat money,” money that is just printed without being backed by gold, as the root of all economic evil, which means that they fiercely oppose the kind of monetary expansion Friedman claimed could have prevented the Great Depression — and which was actually carried out by Ben Bernanke this time around.

O.K., a brief digression: the Federal Reserve doesn’t actually print money (the Treasury does that). But the Fed does control the “monetary base,” the sum of bank reserves and currency in circulation. So when people talk about Mr. Bernanke printing money, what they really mean is that the Fed expanded the monetary base.

And there has, indeed, been a huge expansion of the monetary base. After Lehman Brothers fell, the Fed began lending large sums to banks as well as buying a wide range of other assets, in a (successful) attempt to stabilize financial markets, in the process adding large amounts to bank reserves. In the fall of 2010, the Fed began another round of purchases, in a less successful attempt to boost economic growth. The combined effect of these actions was that the monetary base more than tripled in size.

Austrians, and for that matter many right-leaning economists, were sure about what would happen as a result: There would be devastating inflation. One popular Austrian commentator who has advised Mr. Paul, Peter Schiff, even warned (on Glenn Beck’s TV show) of the possibility of Zimbabwe-style hyperinflation in the near future.

So here we are, three years later. How’s it going? Inflation has fluctuated, but, at the end of the day, consumer prices have risen just 4.5 percent, meaning an average annual inflation rate of only 1.5 percent. Who could have predicted that printing so much money would cause so little inflation? Well, I could. And did. And so did others who understood the Keynesian economics Mr. Paul reviles. But Mr. Paul’s supporters continue to claim, somehow, that he has been right about everything.