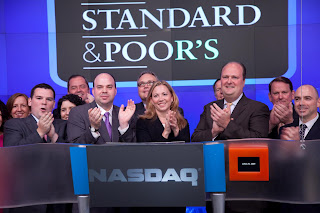 In January, both S&P. and Moody’s Investors Service warned that the United States might tarnish its credit rating if its national debt kept growing. Though the latest S.&P. report did not explicitly refer to the coming Congressional vote over raising the debt ceiling, it certainly added an element to the debate.

But S.&P. did not lay out even the most basic numbers or point readers toward the nonpartisan and definitive Congressional Budget Office analysis of medium- and longer-term budget issues. This matters, because the C.B.O. numbers definitely do not show debt exploding upward immediately from today...

Two serious budget issues are made clear by the C.B.O. analysis. First, the big increase in debt in recent years has been primarily due to the financial crisis. To see this, compare the January 2011 C.B.O. forecast cited above with its view from January 2008 (see page XII, Summary Table 1), before the seriousness of the banking disaster — and the ensuing recession — became clear.

At that point, the C.B.O. expected federal government debt relative to gross domestic product to reach only 22.6 percent in 2018 (compared with the 75.3 percent for 2018 from the 2011 projections.)

In other words, the financial crisis will end up causing government debt to increase by more than 50 percentage points of G.D.P. over a decade. This is the major fiscal crisis of today and the likely one tomorrow...

A future financial crisis, given the nature of our economy, could well cause a debt increase of more than 34 percent of G.D.P. — just look at what happened this time in the United States or the way in which Ireland was ruined by big banks and reaction by the politicians there...

There is, of course, a longer-run budget issue — beyond 2020 –- that is mostly about health care costs. S&P. follows the current consensus by flagging the Medicare component of this...

But the real threat to the economy is health-care costs seen broadly, not just the Medicare component...

Will its broad-brush and somewhat indiscriminate warning push politicians to sensible debate and eventual action –- with regard to both the financial system dangers (the medium-term issue) or health care costs (the longer-term issue)?

Perhaps, but this sort of “warning” may also whip up debt hysteria of a kind that can quite easily lead to policies that quickly undermine growth.

Standard and Poors is most reliable as a functionary of the same interests that got us into the current mess - via decades of tax-cuts-over-everything political opportunism and deeply ingrained corporate overreach to the point of "legalized fraud" driving the financial sector.

There is good reason to worry about long-term deficits and how best to reduce them - with medical costs across the board being the main driver, absent another major financial meltdown. But arm-waving by the banksters' friends at Standard and Poors is not one of them.