Nearly four years after Washington began its huge rescues of banks with taxpayer dollars, an important player in this, one of the great financial dramas of all time, is offering a damning account of how the Bush and Obama administrations handled the whole episode. 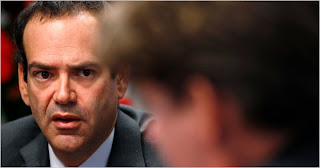 He is Neil Barofsky. Remember him — the man whose job it was to police the $700 billion Troubled Asset Relief Program? And his new account, a book titled “Bailout” (Free Press), to be published on Tuesday, is a must-read.

His story is illuminating, if deeply depressing. We tag along with Mr. Barofsky, a former federal prosecutor, as he walks into a political buzz saw as the special inspector general for TARP.

Government officials, he says, eagerly served Wall Street interests at the public’s expense, and regulators were captured by the very industry they were supposed to be regulating. He says he was warned about being too aggressive in his work, lest he jeopardize his future career.