Ezra Klein, at "Wonkbook", on the deficit debate: 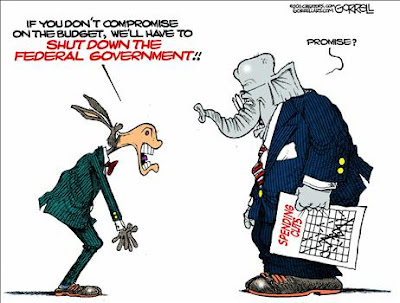 (W)e’re not having a balanced argument over the deficit. We’re having an asymmetric argument over deficit reduction. Republicans see the deficit as an opportunity to push for dramatic and permanent changes to the state — including some that would technically increase the deficit...

As for the Obama administration, they’re proposing a much more modest package that doesn’t use the deficit to push for long-term priorities, and in fact looks like a slightly more conservative version of the Simpson-Bowles report. It’s fallen to liberal think tanks to promote plans that see the deficit as an opportunity to push for major progressive policy changes. But without the support of the White House, those plans aren’t going to get very far...

In the end, Ryan’s plan has made a deal a lot harder than it would’ve been if the two parties had decided to do negotiations first and come out with a final plan together. But from the perspective of Republicans, it’s probably made a good deal a lot likelier.

"A slightly more conservative version of the Simpson-Bowles report" is being negotiated versus GOP Budget Czar Ryan's anti-government radicalism.  The Republicans - despite the deep unpopularity of their "plan" that includes killing Medicare - couldn't ask for a playing field tilted much farther to the right. Whatever compromise comes of this can't be good. Except, as Klein notes, "from the perspective of the Republicans."
Posted by Bruce Schmiechen at 6/07/2011 No comments: Links to this post