What happens to those who lose a presidential campaign? Some can do it with heads rightly held high, and go on to give valuable service to the nation. We were reminded of this just two weeks before the recent election, when George McGovern died. Though he underwent a humiliating defeat by Richard Nixon forty years before, he was a man of integrity, some of whose ideas were continued by people who worked in his 1972 campaign, like Bill and Hillary Clinton, veterans of his Texas office that year. McGovern was re-elected to the Senate after his presidential loss, where he performed important services... 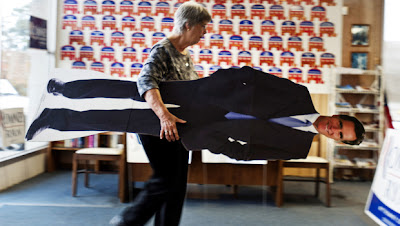 What public service do we expect from Mitt Romney? He will no doubt return to augmenting his vast and hidden wealth, with no more pesky questions about where around the world it is stashed, or what taxes (if any) he paid, carefully sheltered from the rules his fellow citizens follow...

What vestige of a backbone is Romney left with? Things he was once proud of —health-care guarantees, opposition to noxious emissions, support of gay rights and women’s rights, he had the shamelessness to treat as matters of shame all through his years-long crawl to the Republican nomination.

Deficits - Don't believe the "Mediscare" hype. The issue is systemic healthcare costs, which are driven by private markets. 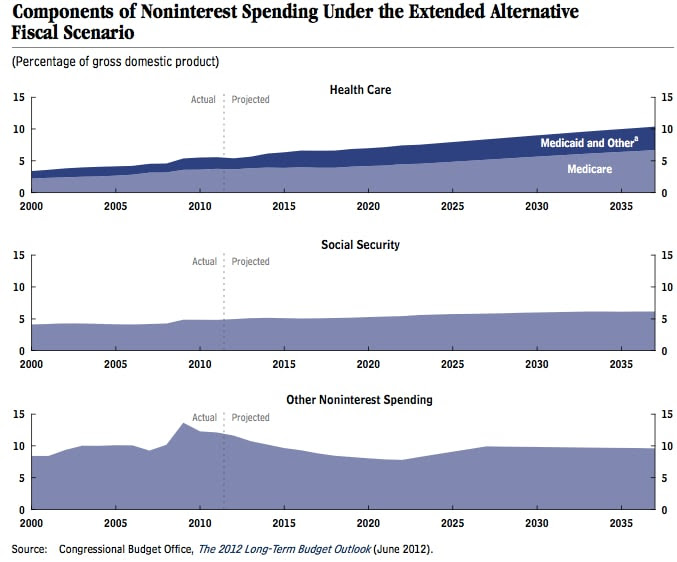 That’s all of the federal government’s spending in three graphs. The top graph is health care, including Medicare, Medicaid and the Affordable Care Act. The middle graph is Social Security. And then there’s literally everything else: Defense, education, infrastructure, food safety, R&D, farm subsidies, the FBI, etc.

What these three charts tell you is simple: It’s all about health care. Spending on Social Security is expected to rise, but not particularly quickly. Spending on everything else is actually falling. It’s health care that contains most all of our future deficit problems. And the situation is even worse than it looks on this graph: Private health spending is racing upwards even faster than public health spending, so the problem the federal government is showing in its budget projections is mirrored on the budgets of every family and business that purchases health insurance...

Got that?  Private health care costs are inflating faster than government health care spending.  Which means it's not a "Medicare" problem.  The issue we need to attack is getting systemic health care costs under control. When you hear anyone blame Medicare as the root of our budget problems or their target in "getting health care costs under control", they are either selling you their ideology or their ignorance.  The prevalence of this nonsense is a key to understanding why as a nation our health care spending per capita is about twice as much as the high-quality universal systems such as France and Canada, with no better outcomes to show for it.
Posted by Bruce Schmiechen at 11/11/2012 No comments: Links to this post