Atrios says it: Eschaton: Planning For 10 Years From Now


The last time the an administration did the supposedly responsible thing, the fiscal "hawks" suddenly decided that the worst possible thing was no longer a deficit, but a surplus, and that therefore it was necessary to have massive tax cuts for rich people.

And they will, of course, do it again.

Any time any DC elite complains about "the deficit" remind them that when Clinton left office we had a huge surplus, so big that at the rate it was being paid down the entire US debt was going to be paid off in 10 years. Bush demanded that we give back the people's money and Greenspan warned of the danger of paying off the debt. Etc. Etc. Etc. Then Bush doubled military spending -- and started two wars on top of that!

So we went from big surplus to huge, huge deficits. Bush said it was "incredibly positive news" when we went back into deficit spending. He said it was good news because it continued the plan to use debt to force the government to cut back. He said that. It was the plan. (Don't take my word for it, click the links.)

The Reagan people said it too, back when they started the massive deficit spending. It was the plan: force the country into massive debt, "starve the beast," and use that to force the government out of business, or at least to be "small enough to drown in a bathtub." They forced the tax cuts and Reagan said this was "cutting the government's allowance." The point was to use revenue cutbacks to force government to shrink, to get out of the way of the 1%. 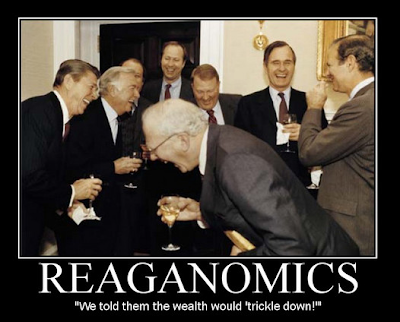 Now that government is very much out of the way of the 1% we are seeing how things work out when the 1% dominate everything.

They called it "strategic deficits." They said it was the plan to force the country into debt, and then they would demand that we cut the things that government does for the 99%, in order to further enrich the 1%. They would scare everyone by saying that the debt will destroy us so we have to cut back. That was the plan. They said that was the plan. And now that the plan is being executed, we should understand that it was the plan and not fall for it!

They said it was the plan. So as the plan unfolds, don't be so surprised.