Bill Clinton’s speech at the Democratic National Convention was a remarkable combination of pretty serious wonkishness — has there ever been a convention speech with that much policy detail? — and memorable zingers. Perhaps the best of those zingers was his sarcastic summary of the Republican case for denying President Obama re-election: “We left him a total mess. He hasn’t cleaned it up fast enough. So fire him and put us back in.”  ... 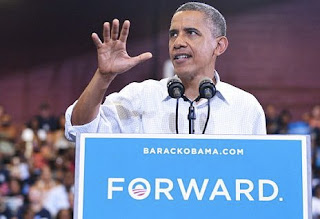 First, and most pressing, there was a crisis in the financial system, with many of the crucial channels of credit frozen; we were, in effect, suffering the 21st-century version of the bank runs that brought on the Great Depression. Second, the economy was taking a major hit from the collapse of a gigantic housing bubble. Third, consumer spending was being held down by high levels of household debt, much of which had been run up during the Bush-era bubble.

The first of these problems was resolved quite quickly, thanks both to lots of emergency lending by the Federal Reserve and, yes, the much maligned bank bailouts. By late 2009, measures of financial stress were more or less back to normal.

This return to financial normalcy did not, however, produce a robust recovery. Fast recoveries are almost always led by a housing boom — and given the excess home construction that took place during the bubble, that just wasn’t going to happen. Meanwhile, households were trying (or being forced by creditors) to pay down debt, which meant depressed demand. So the economy’s free fall ended, but recovery remained sluggish.

Now, you may have noticed that in telling this story about a disappointing recovery I didn’t mention any of the things that Republicans talked about last week in Tampa, Fla. — the effects of high taxes and regulation, the lack of confidence supposedly created by Mr. Obama’s failure to lavish enough praise on “job creators” (what I call the “Ma, he’s looking at me funny!” theory of our economic problems). Why the omission? Because there’s not a shred of evidence for the G.O.P. theory of what ails our economy, while there’s a lot of hard evidence for the view that a lack of demand, largely because of excessive household debt, is the real problem.

And here’s the good news: The forces that have been holding the economy back seem likely to fade away in the years ahead. Housing starts have been at extremely low levels for years, so the overhang of excess construction from the bubble years is long past — and it looks as if a housing recovery has already begun. Household debt is still high by historical standards, but the ratio of debt to G.D.P. is way down from its peak, setting the stage for stronger consumer demand looking forward.

And what about business investment? It has actually been recovering rapidly since late 2009, and there’s every reason to expect it to keep rising as businesses see rising demand for their products...

Does this mean that U.S. economic policy has done a good job? Not at all.

Bill Clinton said of the problems Mr. Obama confronted on taking office, “No one could have fully repaired all the damage that he found in just four years.” If, by that, he meant the overhang of debt, that’s very much the case. But we should have had strong policies to mitigate the pain while households worked down their debt, as well as policies to help reduce the debt — above all, relief for underwater homeowners.

The policies we actually got were far from adequate. Debt relief, in particular, has been a bust — and you can argue that this was, in large part, because the Obama administration never took it seriously.

But, that said, Mr. Obama did push through policies — the auto bailout and the Recovery Act — that made the slump a lot less awful than it might have been. And despite Mitt Romney’s attempt to rewrite history on the bailout, the fact is that Republicans bitterly opposed both measures, as well as everything else the president has proposed.

So Bill Clinton basically had it right: For all the pain America has suffered on his watch, Mr. Obama can fairly claim to have helped the country get through a very bad patch, from which it is starting to emerge.

Posted by Bruce Schmiechen at 9/07/2012 No comments: Links to this post