The Debate over mortgage debt

It seems the administration's economic team - most notably Tim Geithner and Larry Summers - just never got the centrality of "underwater" housing debt in putting brakes on a recovery.  This is an interesting piece in The Washington Post on how the "debate" unraveled on the inside, how it continues with what appears to be total denial on Geithner's part - and the lingering impact of the mortgage crisis:


One year and one month before President Obama won reelection, he invited seven of the world’s top economists to a private meeting in the Oval Office to hear their advice on what do to fix the ailing economy. “I’m not asking you to consider the political feasibility of things,” he told them in the previously unreported meeting.

There was a former Federal Reserve vice chairman, a Nobel laureate, one of the world’s foremost experts on financial crises and the chief economist of the International Monetary Fund , among others. Nearly all said Obama should introduce a much bigger plan to forgive part of the mortgage debt owed by millions of homeowners who are underwater on their properties. 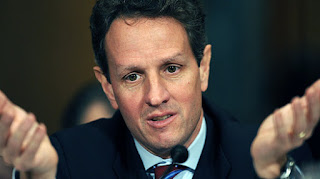 Obama was reserved in response, but Treasury Secretary Timothy F. Geithner interjected that he didn’t think anything of such ambition was possible. “How do we get this done through Congress?” he asked. “What could we actually do that we haven’t done?”

The meeting highlighted what today is the biggest disagreement between some of the world’s top economists and the Obama administration. The economists say the president could have significantly accelerated the slow economic recovery if he had better addressed the overhang of mortgage debt left when housing prices collapsed. Obama’s advisers say that they did all they could on the housing front and that other factors better explain why the recovery has been sluggish.