The Tax Evader in Chief

A key reason for Mr. Romney’s low tax rate is that a very substantial amount of his income comes from capital gains – 51 percent in 2011 and 58 percent in 2010. Capital gains, no matter how large, are taxed at a maximum rate of 15 percent, whereas wage income can be taxed as much as 35 percent by the income tax plus taxes for Medicare and Social Security. The latter two are not assessed on capital gains. 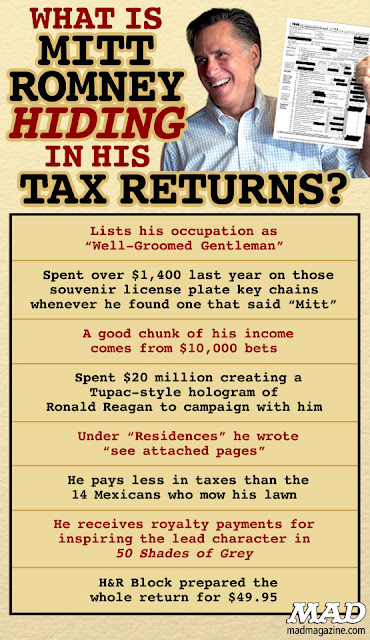 Significantly, much of Mr. Romney’s capital gains income achieved this treatment through a special tax loophole called carried interest. According to recently released documents, executives at Bain Capital, where Mr. Romney made the bulk of his estimated $250 million fortune, saved $200 million in federal income taxes and another $20 million in Medicare taxes because of the carried interest loophole.

The way the loophole works relates to the peculiar method in which money managers are compensated. Typically, they receive a fee of 2 percent of the gross assets under management, much of which comes from employee pension funds, plus 20 percent of any increase in value.

Thus, on $1 billion of assets the managers would automatically get $20 million that would be taxed as ordinary income. If the assets increased 10 percent to $1.1 billion, they would get another $20 million. For tax purposes, this additional $20 million would be treated as a capital gain and taxed at 15 percent.

The theory is that the money managers effectively become part owners of the assets they manage as a result of the fee structure. Critics contend that the distinction between the 2 percent and 20 percent fees is purely artificial — that in reality all their compensation should be treated as ordinary income and taxed as such.

Among the sharpest critics of carried interest is Victor Fleischer, a law professor at the University of Colorado. In a Sept. 4 post on DealBook, he explains that the New York attorney general’s office is looking into the issue, seeking to determine whether money managers have been illegally converting their 2 percent management fees into lower-taxed capital gains.
Posted by Bruce Schmiechen at 9/12/2012 No comments: Links to this post