This suggests that there are a lot of very-high-income guys paying a lower tax rate than their secretaries.

Posted by Bruce Schmiechen at 9/22/2011 No comments: Links to this post

"Non-Labor Income" - it's even better than it sounds... 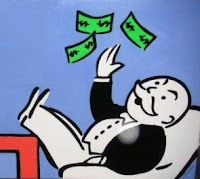 Everyone loves the idea of making money without having to do actual work for it. Not that there's anything wrong with that.  Investment helps make the economic world go round.

But the beauty of non-labor income isn't just that you make more money by already having money - rather than by working harder, working smarter, working longer hours or increasing the value of your labor through education, skills, experience and performance. The real beauty of this "non-labor" income  is that you pay lower tax rates on it than on any income generated by actual work.  Lots lower tax rates! This works out especially well the more money you make from your "non-labor." 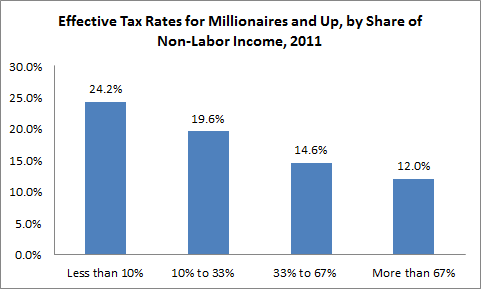 And lest we forget, any attempt to shift the tax rates so that "non-labor income" is treated the same way as income gained by actual work is Class Warfare, motivated by envy and resentment.

I don't know about the "warfare", but I'll admit to more than a little envy...no, make that "resentment"...of folks who make money from having money and for their efforts get to pay lower tax rates, on average, than the rest of us poor suckers. Frankly, it feels a bit like "class warfare" coming from their direction.
Posted by Bruce Schmiechen at 9/22/2011 No comments: Links to this post

More Elizabeth Warren...and why her candidacy is important for American politics