This morning on ABC's "This Week," with David Plouffe interviewed by Amanpour and DNC stalwart Donna Brazile at the Roundtable  - both suggesting some sort of "win" by Democrats in averting some of the more outlandish of the GOP's proposals while agreeing to larger spending cuts than those originally outlined by Speaker Boehner  - it was up to two journalists to make the central point about a an appropriate and coherent Democratic strategy in negotiating the budget deal that was just agreed to and what it means for a liberal agenda moving forward.


I think the Planned Parenthood stuff was a gift to the Democrats and that was so easy for them to push on that. Thank goodness from the Democrats point of view that those riders came up because it allowed the Democrats to argue that actually the Republicans don't care about the economy but pushing their social agenda.

What I think is missing...is Democrats actually arguing that the recovery is incredibly fragile, unemployment is high and it's not about .. if you make cuts in the right way, that's okay.  There is an argument to be made - and I think if anyone makes it, it should be the Democrats - that  says "Don't make cuts right now.  Yes, the budget is a problem but it's a medium term problem...Right now is a time when actually we should still be talking about government spending."


They concede an important predicate for this debate. They have not drawn the line and said this is not the time to be retrenching, so when we begin this bigger debate - I mean this is the foothills of the Himalayan debate that's coming over the overall budget and the Paul Ryan plan.

It's going to be harder for them to come back and say, Look we shouldn't be withdrawing federal spending when the economy's so weak, because they clearly didn't make that argument here.


And there's a strong argument to be made because they could say, so far it's working - and just look across the ocean, look across the Atlantic, the Brits have imposed budgetary austerity and their economy is shrinking even faster than they thought.

This argument is crystal clear, with good evidence based on real-world experience of the European austerity agenda in the midst of continuing high unemployment and lagging economic growth.  Why it was up to two conventional journalists to have to make it, rather than the representatives of the Democratic agenda, is a question we have to ask ourselves going forward.  Something is very wrong with the picture.


*My transcript from This Week's video.
Posted by Bruce Schmiechen at 4/10/2011 No comments: Links to this post

The Drought is Over (at Least for CEOs) -


Rarely has the view from the corner office seemed so at odds with the view from the street corner. At a time when millions of Americans are trying to hang on to homes and millions more are trying to hang on to jobs, the chief executives of major corporations like 3M, General Electric and Cisco Systems are making as much today as they were before the recession hit. Indeed, some are making even more.

The disparity is especially stark as companies are swimming in cash. In the fourth quarter, profits at American businesses were up an astounding 29.2 percent, the fastest growth in more than 60 years. Collectively, American corporations logged profits at an annual rate of $1.678 trillion.

So far, this recovery has not trickled down. After two relatively lean years, C.E.O.’s in finance, technology, energy and beyond are pulling down multimillion-dollar paychecks. What many of these executives aren’t doing, however, is hiring. Unemployment, although down from its peak, stood at 8.8 percent in March. And few economists predict the jobless rate will drop substantially anytime soon.

From Daniel Costello in New York Times' Business Day
Posted by Bruce Schmiechen at 4/10/2011 No comments: Links to this post

View from Salt Lake City: "Ryan’s plan is anchored in an open contempt for anyone who isn’t wealthy"

The Salt Lake Tribune takes on the "serious" Mr. Ryan: 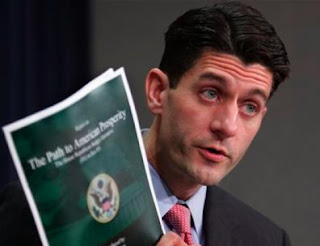 The so-called federal deficit reduction plan announced recently by the Republican chairman of the House Budget Committee is represented as a blueprint that makes the hard choices necessary to steer the United States away from fiscal disaster. But learned analysis exposes Rep. Paul Ryan’s prescription as a plan that differs little from President Obama’s vision in terms of total deficits, but apportions the pain in very different ways.
Ryan’s “Path to Prosperity” runs through various fantasy lands, envisioning that large tax cuts, mostly for the rich, and huge spending cuts, mostly in programs that benefit the poor and middle class, will lead to unprecedented booms in hiring, homebuilding and other economic activities.
Ryan’s plan is mostly a means to shelter those who have already benefited from a half-century of fiscal irrationality and dump the burden on those who are to come later. 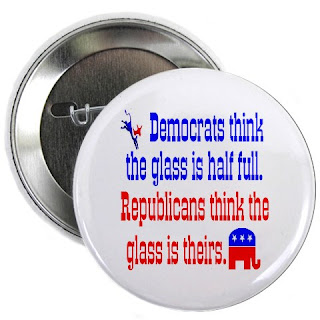 The truth is that Republicans don’t care anything about the deficit. They made that abundantly clear when they controlled Congress during the dismal George W. Bush years. What all of the current budget discussion is about is defunding programs that benefit Democratic constituencies and if possible destroying institutions, such as labor unions, that historically support the Democratic Party. In other words, it’s all about political power; any concern for the deficit is purely for show, window dressing to disguise the true Republican agenda.

* Bartlett has served on the staffs of Congressmen Ron Paul and Jack Kemp and Senator Roger Jepsen; as staff director of the Joint Economic Committee of Congress; senior policy analyst in the Reagan White House; and deputy assistant secretary for economic policy at the Treasury Department during the George H.W. Bush administration.
Posted by Bruce Schmiechen at 4/10/2011 No comments: Links to this post