Will the Supremes' ruling on "Obamacare" be pure politics?

Many legal scholars, including some conservatives, have been predicting that the Supreme Court will uphold the 2010 health care overhaul. But after Tuesday’s arguments, when several justices asked skeptical questions about the heart of the law, a political lens seemed relevant, too. 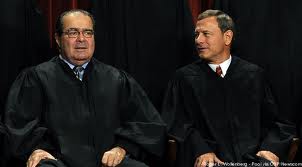 It is obviously too early to know what the Supreme Court will do, despite the rush of commentary after Tuesday’s much-watched hearing. But skeptical questions from the bench are often an indicator of how justices will ultimately vote — and many court experts expressed surprise at the apparent agreement among the conservatives, including Justice Anthony M. Kennedy, the likeliest swing vote.