Romney's remarkable distance from the values of normal Americans

Professor Krugman on Willard's attitude toward the little people and his fraudulent, crackpot characterizations of President Obama:

It’s no secret that, at this point, many of America’s richest men — including some former Obama supporters — hate, just hate, President Obama. Why? Well, according to them, it’s because he “demonizes” business — or as Mitt Romney put it earlier this week, he “attacks success.” Listening to them, you’d think that the president was the second coming of Huey Long, preaching class hatred and the need to soak the rich. 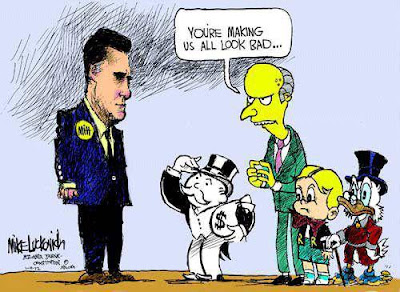 Needless to say, this is crazy. In fact, Mr. Obama always bends over backward to declare his support for free enterprise and his belief that getting rich is perfectly fine. All that he has done is to suggest that sometimes businesses behave badly, and that this is one reason we need things like financial regulation. No matter: even this hint that sometimes the rich aren’t completely praiseworthy has been enough to drive plutocrats wild. For two years or more, Wall Street in particular has been crying: “Ma! He’s looking at me funny!”

Wait, there’s more. Not only do many of the superrich feel deeply aggrieved at the notion that anyone in their class might face criticism, they also insist that their perception that Mr. Obama doesn’t like them is at the root of our economic problems. Businesses aren’t investing, they say, because business leaders don’t feel valued. Mr. Romney repeated this line, too, arguing that because the president attacks success “we have less success.”

This, too, is crazy (and it’s disturbing that Mr. Romney appears to share this delusional view about what ails our economy). There’s no mystery about the reasons the economic recovery has been so weak. Housing is still depressed in the aftermath of a huge bubble, and consumer demand is being held back by the high levels of household debt that are the legacy of that bubble. Business investment has actually held up fairly well given this weakness in demand. Why should businesses invest more when they don’t have enough customers to make full use of the capacity they already have?