Small businesses are hurt by lack of demand, not taxes or regulations

The right-wing mantra is that taxes and regulations are the biggest problems afflicting small businesses.  This contention is fabulist - as in "made up BS unsubstantiated by the evidence."  Here's a graph, courtesy of the Economic Policy Institute,  showing the relative concerns of small business people dating back to the Nixon years. The problem in today's economy is lack of demand - consumer spending - not taxes or regulations. Overwhelmingly. In fact, concern over taxes and regulations under Obama are at about the same levels they were during Reagan's second term: 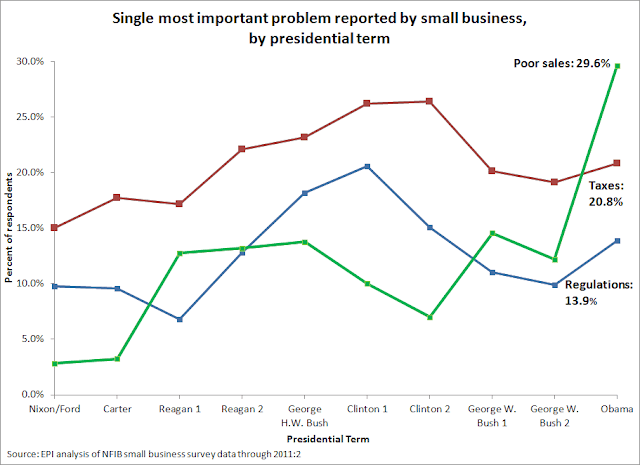 Posted by Bruce Schmiechen at 9/28/2011 No comments: Links to this post

The Lovely Lands of Low Taxes

Conservative economics commentator Bruce Bartlett (domestic policy advisor to Ronald Reagan and Treasury official under GHW Bush), at the NYTs, takes a look at the reality of countries where tax rates are super low: I’m not saying that Republicans are anarchists, only that when it comes to taxes they talk as if they are. Their default position is that there is no level of taxation below which it would be unwise to go, no tax cut too large not to be taken seriously and no justification for a government any larger than one that could be drowned in a bathtub, as the Republican activist Grover Norquist once put it. The Wall Street Journal editorial page routinely refers to those who pay no taxes as “lucky duckies,” as if zero taxation is the ideal state of nature.

Oddly, one never hears Republicans praise those countries where people are lucky duckies — those where taxation is a small fraction of what it is here. Let’s take a look at some of the places.