"Rebellion at the Fed"

Matthew O'Brien at The Atlantic: 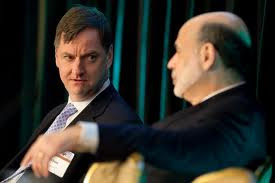 Chicago Federal Reserve president Charles Evans doesn't look the part of a heretic. But in the cozy, conservative club that is central banking, he certainly qualifies. While most of his colleagues at the Fed have recently taken an even more hawkish turn, Evans remains a champion of additional monetary stimulus. And on Tuesday he took an even bigger step: He became the first sitting Fed member to endorse nominal GDP (NGDP) level targeting...

The Fed famously has a dual mandate: It's supposed to promote the maximum level of employment consistent with its two-percent inflation target. In reality, this dual mandate often looks more like a single inflation mandate. NGDP level targeting would do away with this problem by rolling the mandates together. And right now, that would mean a much more aggressive Federal Reserve...

In the end, this is really a clash over inflation. After all, we're talking about central bankers here. The first group is worried that by effectively printing more money to goose the economy (better known to in policy circles as "quantitative easing"), the Fed has already created future inflation. The second group isn't worried about the money that's already been printed, but believes that running the presses any further will create future inflation. Finally, a third group is worried that if the Fed doesn't print more money, there won't be enough inflation to keep the economy healthy. Evans belongs to the last camp.