No joy in Medicareville: more on the funny numbers and dishonest packaging of "Ryancare" 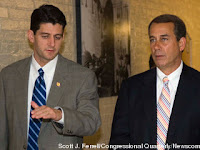 
“Starting in 2022, new Medicare beneficiaries will be enrolled in the same kind of health-care program that members of Congress enjoy.”

There is a huge difference in one important aspect between the Medicare program in the Ryan budget plan and the Federal Employee Health Benefit Plan, or F.E.H.B.P., for federal employees and for members of Congress.

Basically, the F.E.H.B.P. is best described as a typical employer-sponsored health insurance plan. The federal government’s – that is, taxpayers’ – annual contribution to the premiums paid to competing private insurers by employees and members of Congress would rise in step with the average premiums charged by the private insurers (see CBO analysis Page 1).

These premiums have been rising over time more or less in step with the overall increase in per-capita health spending in this country.

By contrast, under the Ryan plan, the federal contribution toward the purchase of private health insurance by future Medicare beneficiaries would be indexed only to the Consumer Price Index (see Page 2 of the C.B.O. analysis).

Over the last three decades, the C.P.I. has grown at a much slower rate than per-capita health spending, especially since 2000 (see the chart below).


As the Congressional Budget Office noted in its analysis of the Ryan proposal, for a typical 65-year-old with average health spending enrolled in a private plan

If private insurance premiums after 2030 continued to grow at a rate exceeding the growth in the C.P.I., the federal contribution to Medicare might shrink even further...

Politicians and elected officials appear to have concluded from years of experience that the public has never favored those who tell them the harsh truth. It’s almost as though the public wants to be misled.

The specific proposals aside, does the Ryan plan offers anything to control overall health-care spending?

No, nor does that appear to have been Mr. Ryan’s objective.